One morning Dad and I were sitting at the breakfast table eating toast and then suddenly out of the blue I asked Dad why do jellyfish sting people? Well Charlotte sit down on the couch and I’ll tell you.

Way back and I mean way back, there was a man named Bob and Bob was a very funny man.

But one day Bob went out to seas going jelly fishing. The day that Bob was meant to come back he didn’t and so all of his family just thought that Bob was just a day late.

The next day at 2.10 his family started to worry and then most of them said

“We’re going to look for him”. About 10 minutes later the men got in their little rowboats and began to row towards where Bob was meant to be. Their location was The Great Barrier Reef. Once they got close they could see big grey clouds!

After 1 minutes worth of looking they found Bob’s boat and so they went to look in it. When they got to the boat they found Bob lying there with a jellyfish stuck to his arm. The men quickly pulled him into one of their boats and headed back.

Once they got back they pulled the jellyfish off and hoped for the best. A few days later Bob’s brother had found that the sting came from their tentacles. When Bob’s brother Fred was over he said I have great news. 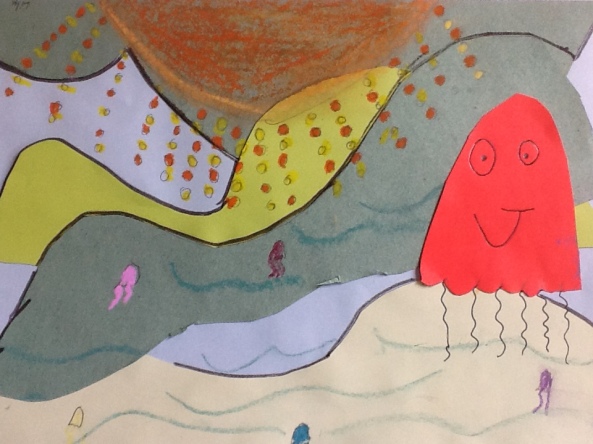 “WHAT! WHAT!” I said. Jellyfish sting people for them to survive and so that’s why the jellyfish stung you. But how do you know that? It’s a very long story.

Bob never got better, but at least he was found.

‘…the black creatures were under the boat.’

James and His dad were out fishing at Pirates cove when James suddenly asked his dad the strangest question, “Hey Dad, why do Killer Whales have white spots?”  “Well,” said James’s dad, “it starts off right here in Cape town at Pirates Cove.  A long, long time ago all the pirates would have a yearly meeting in one of the caves near Table Mountain. They would sail their ships down the coast line and into the bay.”

“Then late one stormy summer’s night the waves were high and the wind was strong. The ships were coming into dock and there were black figures darting under the pirate ships.” “Were they the Killer Whales,” asked James who was suddenly filled with excitement. “Yes, they were.”

“So, where were we up to? Oh yes, now I remember, I was up to the part where the boats were coming in and the black creatures were going under the boat.  They circled the ships playfully as they went on their way.”

At the lighthouse the oldest of all the pirates that lived around Cape Town was having a bit of trouble because the candle wouldn’t light with all the wetness.  He tried and tried but try as he could it would not light.

“Then……James! Are you even listening?” “Yes Dad.” “Okay then back to the story. A giant wave came and took the biggest ship crashing into the rocks. Now, I know you are thinking to yourself ‘What has that got to do with everything’ but you see James this boat had nearly a ton of Condensed milk on it.”

“The Condensed milk fell overboard and into the ocean. It spilt all over those slimy black creatures and it never came off. And that is how the Orca got its white spots James!” 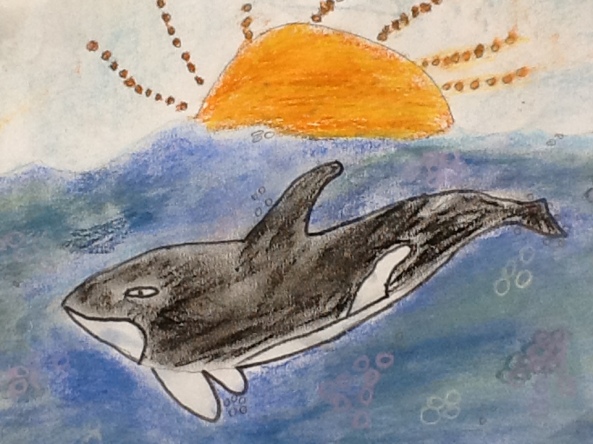 That James, is how the Orca got his white spots.

Eden’s Curse Shortlisted : Look out for Nov. 1st when winners will be announced. 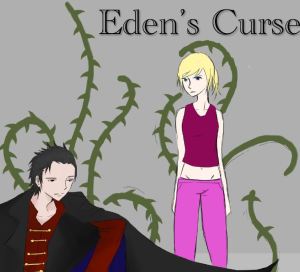 Winning ARTISTS will also be announced on November 1st.

What a great effort for all the teams, and Mr. Grubert.

If you want to read Eden’ s Curse here it is  on the Team 4 link, while you’re there take a look at the other books

Ishmael and the hoops of steel / Michael Gerard Bauer.

The ABC Tasmania is supporting The National Year of Reading and searching for a reader, aged 8 to 12, who participates in reading with enthusiasm and perserverance…are you Tasmania’s Reading Role Model?  This link gives you all the details and allows you to submit your entry on-line.

Tasmania’s selected role model and a parent will travel from Tasmania on Friday 24 August.

“On Saturday August 25 they will be whisked off for visits to two of Melbourne’s must-visit family experiences Scienceworks, where there is the Wallace and Gromit exhibition, and the National Sports Museum.

In the afternoon our young readers will be guests of honour at The Reading Hour event in Federation Square, meeting and mingling with some of their favourite authors as well as ABC 3 stars Kane and Amberley.

We aren’t looking for the best reader, we are looking for a young person whose enthusiasm for, participation in and perserverance with reading sets them apart.” from the website

Think about nominating yourself or others for this wonderful opportunity!

At the end of Term 1 one of our Prep classes visited the Senior School Learning Hub. The visit was a success all round. Everywhere the group, or sometimes line, of little people went faces softened and big smiles were the order of the day. With advance notice some keen Seniors – young ladies and gentlemen – came to meet and greet and read and chat with the little ones.

It’s warm and fuzzy I know….but it was warm & fuzzy.

We’ll definitely be doing this again: a great confidence builder for junior and senior students. There were some budding teachers in the mix and a few very excited preppies who wanted to casually drop in on the Headmaster. In hindsight I think Mr. Norris would have been delighted.

Open to current residents of Australia aged between 12-18 years old. Each state and territory will be awarded an individual and a team prize. Submit entries AS MANY TIMES AS YOU LIKE between 1st March & 31st May 2012.

10 entries in each state or territory forwarded to the panel of judges at The State Library of Victoria’s Centre for Youth Literature – this will be  shortlisted of 3. Click on the link above for more details! 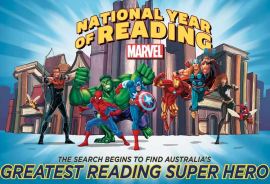 Marvel & Scholastic – their powers combined for the National Year of Reading!

The competition closes on 3 August 2012. The winners will be judged on 24 August 2012 and published on this website.

The National Prize: The ultimate Apple home system including a Mac Book Air, iPad2, the latest iPod — worth over $2000 in total! —and a super Scholastic kids’ library valued at over $500.

PLUSthe school of the National Prize winner receives $5000 worth of supplies from Scholastic! The school library also wins an iPad2.

State Prize: A winner will also be selected from each State and will receive an iPad2 and a super kids’ library valued at over $250!

So what’s your book pitch?

Got a favourite book? Think everyone should read it? Here’s your chance to convince them – and win! You might not only have them reading it but you could also share in $40,000 worth of prizes.

From The National Year of Reading : submit entries on-line.

So want to pitch a book to a friend to encourage them to read it? How?

Submit in ANY FORMAT YOU CHOOSE…short stories, poem, song, illustration, costume, a model, an art piece – anything you can imagine.

2012 is the National Year of Reading so lets start and share our holiday reads. Did you have an endless summer or snatch some precious time on-line, with a book or an e-reader?

Did you visit a gallery and ‘read’ some art or review a film in your mind? Did you write or illustrate your novel, poetry or graphic work?